Looking for something festive, holiday-like and chaotic for the blog, I came across color-changing cats. The history of color-changing cats is a fascinating one, involving Carl Sagan and accurate predictions of unfathomable chaos over the next ten thousand years. Because while we don’t know what life will be like that far in the future, consider how much the world has changed in the last hundred, and square that.

Of course, 10,000 years matters because it’s both substantially longer than meaningfully recorded history (or even a meaning for meaningful recording of history), and because it’s a good approximation for how long certain radioactive isotopes will remain dangerous.

So the US government, producer of said isotopes in its nuclear weapons programs, has convened panels of the great and clever to consider how to ensure that those isotopes are protected. Solutions were proposed including a skull and crossbones and giant spikes surrounding the site.

Read or listen to “Ten Thousand Years ” on 99% Invisible to see why those won’t work. One fascinating solution involves the creation of both color-changing cats and songs about them, such as:

One of the few things that’s for certain, over the next ten thousand years, assuming people are around, some will continue to ache for control they cannot achieve, and produce crap like a DRM-enabled litter box.

A few credits: The music is from 10,000 year earmworm. The photo: 12 bizarre examples of genetic engineering

Today’s “the future is cool” entry is the cliffs of insanity:

Actually, I’m lying to you, they’re the Cliffs of Comet Churyumov–Gerasimenko, as photographed by the Rosetta spacecraft. I just think its cool similar they look, and how the physical processes which created the Cliffs of Moher may also have been at work on a comet.

Which we sent a spacecraft to go photograph.

When you were growing up, 2014 was the future. And it’s become cliche to bemoan that we don’t have the flying cars we were promised, but did get early delivery on a dystopian surveillance state.


So living here in the future, I just wanted to point out how cool it is that you can detect extrasolar planets with a home kit.

Listening to the radio, there was a discussion of how the folks at NBC were worried that people were going to “hatewatch” their new version of Peter Pan.

It’s fascinating. They discussed how people wanted to watch it to tweet cynically at its expense. The builder/breaker split isn’t just present in systems engineering, it’s everywhere. It’s easier to snark than to contribute. Any idiot with a crowbar can break things. And maybe it feels good.

The PR folks were also talking about how people had trouble watching a non-ironic version of Peter Pan. That sincerely enjoying a lovely children’s story had become culturally unacceptable.

Let’s try to do better.

At BruCon 0x06, I was awoken from a nap to the sound of canons, and looked out my window to see soldiers marching through the streets. It turns out they were celebrating the 200th anniversary of the Treaty of Ghent. As I’m sure you’ll recall from Wikipedia, the Treaty of Ghent ended the war of 1812, and was the second war between Great Britain and the less Canadian parts of its North American colonies. 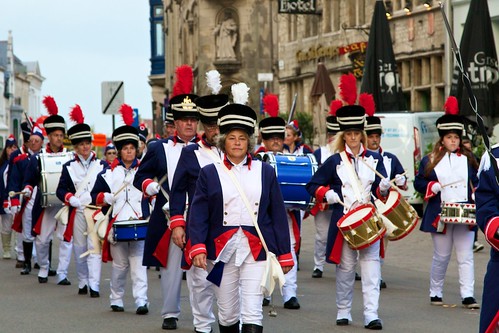 Lately, I’ve been thinking a lot about that and what it tells us about Iraq, ISIS and more recently, Ferguson, and I want to write some of it down to see if it makes sense.

Much of our policy in Iraq and Afghanistan seems to operate on a model of history which goes something like this: after the revolutionary war, town meetings coalesced into the Constitution, and we all lived democratically ever after. It’s an ahistorical view that forgets the Articles of Confederation, the Whiskey Rebellion, Shays Rebellion, and what some in the American south still call “the War of Northern Aggression.” It takes time to develop the institutions of a functioning democratic society.

Is it any surprise that after years of dictatorships, torture of dissidents, children growing up under sanctions (in the case of Iraq), occupation, and civil war, the people of Iraq are not using democracy to solve their problems? That they fight over how to run their country?

While each has a unique history and set of circumstances, it appears to me that there is, across Afghanistan, Iraq, Syria, a crisis of legitimacy. The people who live in those areas have disagreements about not only who should lead them, or what policies should be in place, but about the process for selecting their leaders or governments, and the powers those governments should have.

Their disagreements are strong enough that many people are willing to take up arms rather than acquiesce to other visions. Our understanding of these disagreements is muddied by use of terms like “militia”, “the legitimate security forces” or “the so-called Islamic State.”

The Islamic State, with territory, an army, and a currency, is in many ways, no more or no less legitimate than the army and currency of Prince Assad of Syria. (He is a prince in all but name, having inherited power from his father, that literal inheritance of power being the defining feature of princes.) Assad has taken the step of staging a Potemkin village election, because he understands that legitimacy (rather than power) comes from the consent and agreement of the governed.

This is why Churchill said that democracy is the worst form of government, save all those others that have been tried. No one really thinks that asking a bunch of people who can’t be bothered to vote who should lead them is a great way to get the best people into government. But democracy is a unique way to give people a voice, and in that voice, get their consent. The form democracy, that everyone has a voice, is what gives it its legitimacy. Another way to say that is it’s the ballot or the bullet. (If you haven’t listened to Malcom X give that speech, it’s really an outstanding use of your time. Ballot or Bullet Part I, Ballot or Bullet Part II. In two parts from 100 American Speeches, not sure why it’s two-parted.)

Developing legitimacy requires both institutions and time. The institutions must show that they are reliably better than other choices, or people will pursue those other choices. When Federal grand juries return indictments in 162,000 out of 162,011 cases brought to them, it is reasonable to question if they are a worthwhile or trustworthy institution, or act simply as an instrument of power. From that same 538 Story, grand juries in Dallas reviewed 81 shootings by officers, and returns a single indictment. It is easy to think something is out of whack.

What I think I see in Ferguson is that the institutions of justice have failed, again and again. They didn’t just fail when Darren Wilson shot Michael Brown. Police officers can and will make bad decisions. But afterwards, they continued to fail. The medical examiner didn’t take photos because the battery in his camera died. The prosecutor led Darren Wilson’s testimony.
The institutions didn’t just failed in the moment, they couldn’t be made to work under an intense spotlight. The figures about grand jury indictments indicate that they system is failing victims of police violence. (Although Law Proffesor Paul Cassell makes a case that the grand jury did the right thing, and Wilson had a strong self-defense claim.) However, the institutions didn’t fail completely. A grand jury met, its activity was transcribed and the transcript was released. These elements of transparency allow us to judge the system, and find it wanting. But even while wanting, it’s better than judgement in the ‘court of public opinion,’ and its better than mob justice or lynchings.

These failures may lead reasonable people to ask what alternatives to violence exist? It may lead people to think that violence or destruction is their best option. Perhaps the democratic bargain as a whole is no longer sufficiently legitimate to the people protesting or even rioting in Ferguson. To be clear, I don’t think that the violence or property destruction will improve their lives. In fact I believe that violence and property destruction will make their lives worse. I also think that the people rioting, if they would sit down and talk it through might even agree that burning their own community won’t help. But they’re living in a system where things are more arrest warrants than people.

(There’s a whole related history of the use of offices to enrich office-holders, including the sale of military commissions, the sale of tax collection jobs, etc. I think that’s too complex for me to work into a single blog post. But briefly, the idea that positions were held as a public trust was an important development. We’ve lost it to the idea that because
officials will sometimes act in their own interest, we should only expect them to act that way. In no longer holding people to an ideal, we’re losing something.)