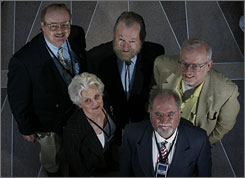 USA Today tells us, “Sci-fi writers join war on terror,” in which, “the Homeland Security Department [sic] is tapping into the wild imaginations of a group of self-described “deviant” thinkers….”

There are many available cheap shots as well as fish to shoot in that barrel. I’m going to take a cheap shot at one not in the barrel. The writers brought in are: Jerry Pournelle, Arlan Andrews, Greg Bear, Larry Niven and Sage Walker.

Do you notice anyone missing who should be there? How about Tom Clancy, who wrote a novel in which a Boeing 747 is used as a cruise missile to take out the US Capitol and much of the government?

I can almost excuse the DHS, after all, they’re the ones who admit to not having enough imagination. But look at this:

During a coffee break at the conference, Walker, Bear and Andrews started talking about the government’s bomb-sniffing dogs. Within minutes, they had conjured up a doggie brain-scanning skullcap that could tell agents what kind of explosive material a dog had picked up.

Oh, wow! Brain-scanning dogs. (Incidentally, this shows how ignorant they are of how sniffer dogs work. They’re playing “find the ball” by smell. They don’t know explosives from treats.) Why did none of the writers ask each other in a coffee break, “Hey, why isn’t a guy who actually predicted this sort of thing here?”

Probably because, “for this group, Walker says, there’s no such thing as an ‘unthinkable scenario.'”

Sometimes with imagination, less is more.

6 thoughts on “Failure of Imagination”